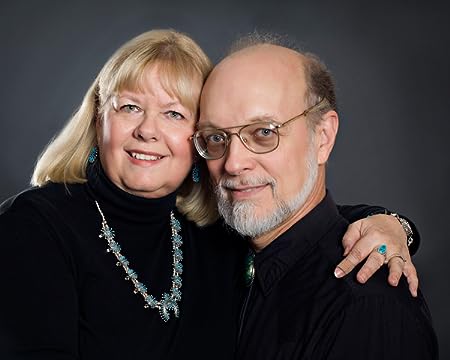 Follow to get new release updates and improved recommendations

Putting words and stories on paper is second nature to co-authors C.D. Hersh. They've written separately since they were teenagers and discovered their unique, collaborative abilities in the mid-90s. As high school sweethearts and husband and wife, Catherine and Donald believe in true love and happily ever after.

The books of their paranormal romance series entitled The Turning Stone Chronicles are available on Amazon. They also have a short Christmas story, Kissing Santa, in a Christmas anthology titled Sizzle in the Snow, with seven other authors.

They are looking forward to many years of co-authoring and book sales, and a lifetime of happily-ever-after endings on the page and in real life.

Are you an author?

Help us improve our Author Pages by updating your bibliography and submitting a new or current image and biography.
Learn more at Author Central
1 11 1
Previous page
Next page 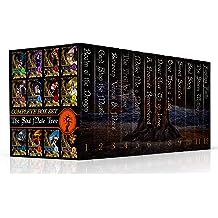 The Soul Mate Tree Complete Box Set Mar 10, 2019
by Cici Cordelia, C.D. Hersh, S.C. Mitchell, Tina Susedik, Mackenzie Lucas, Erin S. Riley, Maggie Mundy, Addie Jo Ryleigh, L.D. Rose, Mikea Howard, Cerian Hebert, April A. Luna
( 1 )
$9.99
Enjoy the full collection of The Soul Mate Tree novellas for one low price.
An ancient legend spanning eras, continents, and worlds. To some, it's nothing more than a dream. To others, a pretty fairy tale handed down through the generations.
For those in critical need of their own happy ending, a gift.
Book One, Realm of The Dragon, CiCi Cordelia: Hurtled into an unfathomable world, Lily faces her destiny.

Book Five, Make Me a Match, Mackenzie Lucas: Your perfect match is closer than you think.

Book Seven, Never Give Up on Love, Maggie Mundy: Vincent finds his love, a vampire hunter who could kill him.

Book Eight, Once Upon a Lady, Addie Jo Ryleigh: Bound by duty . . . tempted by desire.

Book Eleven, The Storm Within, Cerian Hebert: Her love offered salvation, if she can heal his heart. 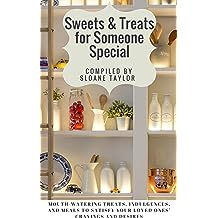 Sweets & Treats for Someone Special: Recipes for Valentine's Day Jan 29, 2018
by HL Carpenter, Carol Browne, Sara Daniel, C.D. Hersh, Vonnie Hughes, Alicia Joseph, Sharon Ledwith, Susan Lodge, Anne Montgomery, Chris Pavesic
$0.99
If the thought of cooking a romantic meal or baking a sweet treat for your true love makes you tingly all over, then have we have a gift for you.

Love is in the air…and kitchen! Sweets and Treats for Someone Special is your go-to recipe book for entertaining on Valentine’s Day, hosting bridal showers and engagement parties, or celebrating that special event with your true love. Written by fourteen proficient and prolific authors, of various ages and genres, the included recipes offer a wide variety of mouth-watering treats, indulgences, and meals to satisfy your loved ones’ cravings and desires.

Sweets and Treats for Someone Special is your go-to recipe book for entertaining on Valentine’s Day, hosting bridal showers and engagement parties, or celebrating that special event with your true love. Compiled by Sloane Taylor and designed by mother-daughter duo HL Carpenter, the included recipes offer a wide variety of mouth-watering treats, indulgences, and meals to satisfy your loved ones’ cravings and insatiable hunger.

So why not have your just desserts? Literally. You’ve got nothing to lose and sultry memories to gain when you download Sweets and Treats for Someone Special. There’s a recipe for even the fussiest lover in your life. Give yourself a gift during the season of love with a sensual cookbook from fourteen writers who would love nothing more than to share their favorite recipes, and fulfill your deepest desires. Bon Appetit!
Read more 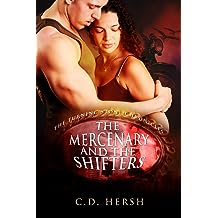 The Mercenary and the Shifters (The Turning Stone Chronicles Book 4) Jul 27, 2016
by C.D. Hersh
( 3 )
$2.99
When mercenary soldier Michael Corritore answers a desperate call from an ex-military buddy, he finds himself in the middle of a double kidnapping, caught in an ancient war between two shape shifter factions, and ensnared between two female shape shifters after the same thing ... him.

Shape shifter Fiona Kayler will do anything to keep the shipping company her father left her, including getting in bed with the enemy. But when she believes the man trying to steal her company is involved with kidnapping her nephew, she must choose between family, fortune, and love. The problem is ... she wants all three. 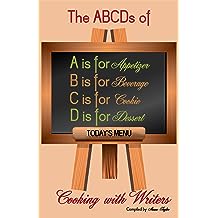 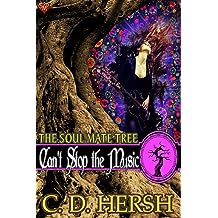 For college senior and hippie wannabe Rosemary—Rose for short—a teaching job is within her grasp, but she wants more. She wants love, the kind of love that has bound her parents for so many years. When she’s dumped by her current boyfriend because her morals can’t bring her to give in to free love, she finds herself at Woodstock in the middle of the biggest free-love music festival of the Sixties. Alone, again. Until a magical tree grants her wish and she finds the man of her dreams—and loses him before she really knows who he is.

Dakota meets the girl of his dreams at Woodstock, but a jealous wannabe girlfriend drives them apart before he can discover Rose’s last name and where she comes from. After he sees a disappearing tree that promises him true love, a frantic search to find Rose comes up empty-handed.

Magic and music brings them together at Woodstock in 1969. Misunderstandings tear them apart. Will two flower children find one another again, or live with missed opportunities? 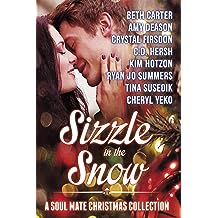 Unlucky-in-love Brooke Woods finds herself with a Christmas delivery and it isn't from Santa. When her boyfriend leaves her for their neighbor, she heads to the nearest bar, meeting hunky, nice guy Anderson Bradley. The two only exchange first names, and their hot fling leaves them both wanting more but their anonymity makes that impossible.

Brooke never thought she'd end up in a hospital pregnant at Christmastime. Will a Santa Baby bring the new mother and father together or tear them apart?

When Grace Sellers needs to start over, she moves back to her old hometown with her two young children in tow. But the last person she expects to see is her high school crush, Michael Dennison.

Is this unexpected encounter a mere coincidence or a second chance at true love?

'TWAS THE CRAZY NIGHT BEFORE CHRISTMAS by Crystal Firsdon

"'Twas the night before Christmas, when plans led to danger
For Clara and Drew, who until now were strangers.
As they run for safety, desire comes fast . . .
Will they have each other, or is this night their last?"

Is kissing the Santa of her dreams worth the risk of ending up on the naughty list?

THE SNOW BIRD by Kim Hotzon

Lauren, a young single mother, is struggling to keep her children fed and a roof over their heads as the holidays approach.

Christmas is looking bleak until a sexy and wealthy property developer unexpectedly shows up in town, offering to repair her roof . . . and a whole lot more.

Years ago Paige and Shane experienced a tragic event in their romance. Unable to move past it, they broke up. Yet the passion remains, and she returns at Christmas time in an attempt to rekindle the love she and Shane once shared. It's a rocky road, and it seems they might not succeed until a freak accident shows them what they really have to lose.

Can Shane tame Paige's heart by Christmas? Or should they just let those still burning flames slowly die?

When Marci Hofer becomes fed up with the lack of attention from her husband, David, she decides to leave him. Devastated, he begins a campaign to bring her home. Calling it Operation Santa, he learns what he thought would be as simple as sending her gifts can backfire in the most embarrassing ways.

Will he survive the battle to get her back?

Steve knows he screwed up, but he's determined to reclaim the woman he loves and the babies she carries.

But when he sweeps back into her life on Christmas Eve, Amy's not sure she's ready to forgive him for abandoning her six months earlier.
Read more 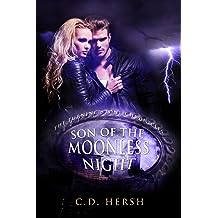 Son of the Moonless Night (The Turning Stone Chronicles Book 3) May 27, 2015
by C.D. Hersh
( 5 )
$2.99
Owen Todd Jordan Riley has a secret. He’s a shape shifter who has been hunting and killing his own kind. To him the only good shifter is a dead shifter. Revenge for the death of a friend motivates him, and nothing stands in his way . . . except Katrina Romanovski, the woman he is falling in love with.

Deputy coroner Katrina Romanovski has a secret, too. She hunts and kills paranormal beings like Owen. At least she did. When she rescues Owen from an attack by a werebear she is thrust back into the world she thought she’d left. Determined to find out what Owen knows about the bear, she begins a relationship meant to collect information. What she gets is something quite different-love with a man she suspects of murder. Can she reconcile his deception and murderous revenge spree and find a way to redeem him? Or will she condemn him for the same things she has done and walk away from love? 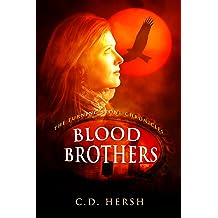 Blood Brothers (The Turning Stone Chronicles Book 2) Oct 29, 2014
by C. D. Hersh
( 11 )
$2.99
When Delaney Ramsey is enlisted to help train two of the most powerful shape shifters the Turning Stone Society has seen in thousands of years, she suspects one of them is responsible for the disappearance of her daughter. To complicate matters, the man has a secret that could destroy them all. Bound by honor to protect the suspect, Delaney must prove his guilt without losing her life to his terrible powers or revealing to the police captain she’s falling for that she’s a shape shifter with more than one agenda.

The minute Captain Williams lays eyes on Delaney Ramsey, he knows she’s trouble. Uncooperative, secretive, and sexy, he can’t get her out of his mind. When he discovers she has a personal agenda for sifting through all the criminal records in his precinct, and secretly investigating his best detective, he can’t let her out of his sight. He must find out what she’s looking for before she does something illegal. If she steps over the line, he’s not certain he can look the other way for the sake of love.
Read more
Other Formats: Paperback , Mass Market Paperback 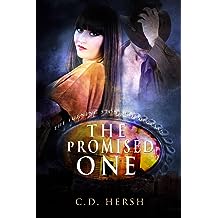 The Promised One (The Turning Stone Chronicles Book 1) Dec 7, 2013
by C. D. Hersh
( 19 )
$3.99
In the wrong hands, the Turning Stone ring is a powerful weapon for evil. So, when homicide detective Alexi Jordan discovers her secret society mentor has been murdered and his magic ring stolen, she is forced to use her shape-shifting powers to catch the killer. By doing so, she risks the two most important things in her life—her badge and the man she loves.

Rhys Temple always knew his fiery cop partner and would-be-girlfriend, Alexi Jordan, had a few secrets. He considers that part of her charm. But when she changes into a man, he doesn’t find that as charming. He’ll keep her secret to keep her safe, but he’s not certain he can keep up a relationship—professional or personal.

Danny Shaw needs cash for the elaborate wedding his fiancée has planned, so he goes on a mugging spree. But when he kills a member of the secret society of Turning Stones, and steals a magic ring that gives him the power to shape shift, Shaw gets more than he bargained for.
Read more
Other Formats: Paperback

Are you an author? Visit Author Central to change your photo, edit your biography, and more
Back to top
Get to Know Us
Make Money with Us
Amazon Payment Products
Let Us Help You
EnglishChoose a language for shopping. United StatesChoose a country/region for shopping.
© 1996-2021, Amazon.com, Inc. or its affiliates